When Miranda makes music with Leo, she plays like an angel. But Leo knows they’re playing with fire. There’ll be hell to pay – literally. A dark romance with a supernatural twist: The Omen for the Twilight generation.

What price would you pay for superlative talent?

Sparks fly when pianist Leo steps in to help Miranda audition for a violin scholarship to the prestigious Harkness Conservatory. He’s intense, patient, gorgeously French, and he plays the piano like a dream. The way they play the Kreutzer Sonata goes beyond anything she’s experienced.

But while 17-year old Miranda is impressing the panel, another candidate goes missing. From that moment, something ungodly seeps into her life. The question is – did the music draw in the forces of darkness? Or was it already there?

Oblivious to the ongoing search for the missing musician, Miranda and Leo travel to a medieval town in France, to perform in a prize-winners’ concert. Their attraction intensifies, even as Leo is revealed to have disturbing, even violent, family connections. Miranda is warned off…but it may already be too late.

Only a secretive, ancient sect can protect Miranda now. How can she accept their help when she can’t quite accept that she’s in danger?

Get Prelude, the Sonata prequel, FREE today! Click on the cover to get yours!

Mari Rey is a fan of action adventure, dark romance and sci-fi and fantasy thrillers. When not writing screenplays or novels Mari spends way too much time watching TV and adores Once Upon A Time, Game of Thrones and Stargate Universe. If that was all she watched on TV, she’d probably have more time to write, but alas! It’s just the tip of the iceberg. Mari lives in England with a husband, two big kids and a very sweet little cat.

You can get in touch with Mari via her facebook page fb.me/marireyauthor. 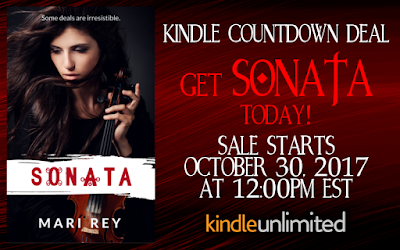