UNDER TWILIGHT IS NOW AVAILABLE!!

Nothing ever truly dies…

With the throne finally in her power, Kenna Carter should be able to relax. But with the threat of a Twilight invasion looming and the fate of her people, both djinn and human, at stake, there are several tough decisions to be made. It doesn’t help that her Fearless instincts contradict her monarch duties at every turn, throwing her into the path of danger again and again. When the threat they’re facing turns out to be much bigger than they could ever have imagined, Kenna is faced with her biggest challenge yet. A challenge that may end up being her last.

An urban fantasy saturated with adrenaline pumping action, core melting romance, and all the feels. 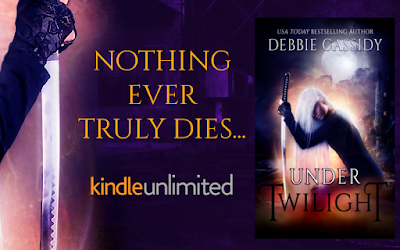 Debbie Cassidy lives in England, Bedfordshire, with her three kids and very supportive husband. Coffee and chocolate biscuits are her writing fuels of choice, and she is still working on getting that perfect tower of solitude built in her back garden. Obsessed with building new worlds and reading about them, she spends her spare time daydreaming and conversing with the characters in her head – in a totally non psychotic way of course. She writes High Fantasy, Urban Fantasy and Science Fiction. Debbie also writes dark, diverse Urban Fantasy fiction, under the pen name Amos Cassidy, with her best friend Richard Amos.