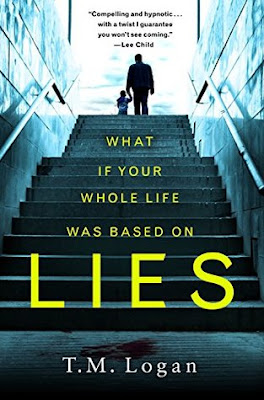 What if you have the perfect life, the perfect wife and the perfect child—then, in one shattering moment, you discover nothing is as it seems? Now you are in the sights of a ruthless killer determined to destroy everything you treasure.

It’s the evening drive home from work on a route Joe Lynch has taken a hundred times with his young son. But today, Joe sees his wife meet another man—an encounter that will rip two families apart. Raising the question: Can we ever really trust those closest to us?

Joe will do whatever it takes to protect his family, but as the deception unravels, so does his life. A life played out without any rules. And a cunning opponent who’s always one step ahead.

T. M. Logan’s Lies is an unputdownable thriller that will keep readers guessing until the jaw-dropping finale.

“Just when you think things can’t possibly get worse...they do. And then some. Lies is positively riveting, from the captivating first scene to the shocking twist at the end.” —Sandra Brown, #1 New York Times bestselling author of Seeing Red

"A tense and gripping thriller." —B.A. Paris, bestselling author of Behind Closed Doors

T. M. Logan was born in Berkshire to an English father and a German mother. He studied at Queen Mary and Cardiff universities before becoming a national newspaper journalist. He currently works in communications and lives in Nottinghamshire with his wife and two children. LIES is his first novel. 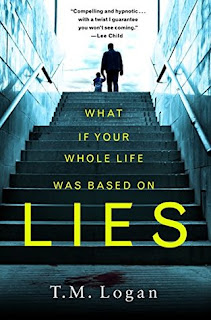 When Joe Lynch's young son spots his mother's vehicle entering into a parking lot of a hotel he begs his father to turn around and go back to see her, they decided to surprise her...but they wind up being the ones who get surprised. Once they arrive they spot her speaking with a family friend Ben Delaney, and from the looks of things it's not a pleasant conversation, when they get a little closer to them they begin to hear them having a heated argument, so Joe tries to intervene. Which causes a little scuffle, punches are thrown, and Ben winds up hitting his head and is knocked unconscious, in the mean time Joe's son starts to have an asthma attack, which causes him to panic and flee the scene to get his son help. When he returns to the scene later to check on Ben and ensure that he is alright, he discovers that Ben and his car are both missing. Shortly there after he starts to receive threatening messages from Ben, Ben wants revenge and he will stop at nothing to get it... the peculiar thing is, Ben's wife reported him missing a few days before. And now Joe is the number one suspect...


Between the pages of this book you will discover a well written psychological thriller that is riddled with crafty little twists and turns that will toy with your mind, and make you question everything and everyone you meet. I have to say this was quite an impressive debut, once I cracked the cover of it I couldn't bring myself to put it down, and just when I thought I had things figured out, I'd turn the page and be hit with another blow, and stumped all over again! If you are looking for your next thrilling literary escape, look no further, Lies is certain to give you everything your after, and much more!

I requested an advanced copy of this title from NetGalley and I am voluntarily leaving my honest opinion.