Review Tour For: Falling for the Good Guy!

A sexy, often emotional treat that will resonate with the 'nice girl' in all of us." -- Lexi Ryan, New York Times and USA Today Bestselling Author

Abby Bartlett is well aware that everyone thinks she's in love with her best friend Brian. He is, after all, the type of man a nice girl should be with--the polar opposite of the bad boy--the kind of guy who didn't let his wife's decade-long illness stop him from showering her with a lifetime of love every second until her dying day. Yes, Brian has been the yardstick against which Abby has measured all other men. But everyone's wrong; she couldn't possibly be in love with him.

Because she's never once allowed herself that option.

It's taken a while but Brian Sullivan has finally come to terms with being a widower at the age of thirty, surviving the woman he spent half his life loving, a third of it losing. Truth is though, he wouldn't have 'survived' any of it really had it not been for Abby--sweet, incredible Abby--the woman he's never once had to picture his life without, never realized he couldn't truly live without. Until now. Now that he's finally able to love her the way she deserves, the way he knows she wants to be loved...by his brother.

Who's giving him exactly one chance to speak now or forever hold his peace.

Authors Note: This is NOT a standalone. This is the first book in a three-book serial.

This three-book serial is part of the CAN'T RESIST series. Books #1-3 (Sullivan Brothers "Nice Girl" trilogy) must be read in order. While Book #4 is a separate standalone (the other brother's happily ever after), it is recommended that it be read after the trilogy. Books #1-3 are also available as a bundled boxed set.

NEW YORK TIMES & USA TODAY bestselling author Violet Duke is a former professor of English Education ecstatic to be on the other side of the page now writing emotion-rich stories with fun, everyday characters and sweet, sexy match-ups. Since her debut series in 2013, over a million readers have put all four of Violet's laugh & cry contemporary romance series on bestseller lists and Top 10 charts across the major eretailers, both in the U.S. and internationally.

When she isn't feeding her book-a-day addiction, Violet enjoys doing far too many things without checking the directions first (often with outrageous power tools she has no business operating), and cooking impossible-to-replicate 'special edition' dishes that laugh in the face of recipes. She lives in Hawai'i with her kids (Violet & Duke) and Mr. Violet Duke (their ringleader), with a PJs-and-rubber-slippers work dress code she takes very seriously. 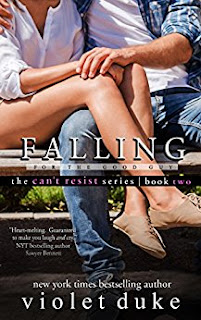 From an outsider looking in one would deduct that Abby and Brian are involved, they spend copious amounts of time with one another, share outings together with his daughter, and seem to be embroiled in a happy little love affair. But honestly that really isn't the case, they do spend time with one another, but only as friends, and have remained completely platonic during their long friendship; mainly because Brian has been nursing a broken heart due to the loss of his wife.

Abby has been the one to help him hold it together, keep him and his daughter on task, and been the one to brighten his life on some of his darkest days. There is honestly no way he could survive without her, she means the world to him and his daughter, but unfortunately she also means the world to someone else too... his brother Connor. His brother and Abby dated briefly for a month, but Connor doesn't do commitment, and when he found out that Brian was interested in pursuing Abby he decided to step aside. But for how long?

Now both Sullivan men find themselves in love with the same woman, and she loves both of them for very different reasons, but only one of them can hold heart forever!

Falling for the Good Guy brings readers back into the lives of the Sullivan men, and the beautiful woman who has managed to capture both of their hearts, and this time the story centers more around the relationship between Brian and Abby. After watching her discover something with his brother Connor, Brian starts to realize how important Abby is to him and it has him wanting to hold on to her and all that they have, but the question remains if Abby feels the same, or if what she has with his brother will be stronger. This little scenario just keeps getting more interesting, and more torturous on my heart, I honestly have no idea which way this one is going to go, just when I thought I was on team Connor, Brian swooped in and had me doubting my decision! Can't wait for the next installment and to see how it all plays out!! Highly recommend this serial, it's loaded with feels, swoons, and many moments that are good for the heart!