Review Tour For: Resisting the Bad Boy by Violet Duke! 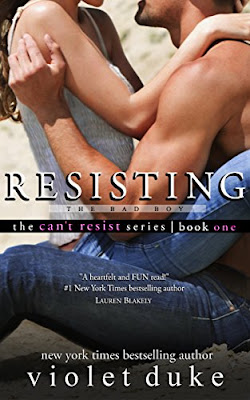 Abby Bartlett is the quintessential nice girl. Between teaching, volunteering, completing her PhD, and helping her best friend raise his daughter, Abby never gets the chance to be anything but nice. That is, until the all-wrong-for-her man she's only ever known from afar starts daring her to simply take that chance for herself. His sage advice? Try something wild and fast.

An unbridled, hotshot attorney with a not-so-little black book, Connor Sullivan has earned himself quite the bad boy reputation. But in his defense, he's a very conscientious one. He knows far too well that sometimes in life, love isn't enough...or worse, not even a factor at all. To avoid that misery--and repel the drama--Connor always makes his one and only rule crystal clear right from the start. Absolutely nothing more than a month.

Turns out, a whole lot can happen in one month.

Authors Note: This is NOT a standalone. This is the first book in a three-book serial.

This three-book serial is part of the CAN'T RESIST series. Books #1-3 (Sullivan Brothers "Nice Girl" trilogy) must be read in order. While Book #4 is a separate standalone (the other brother's happily ever after), it is recommended that it be read after the trilogy. Books #1-3 are also available as a bundled boxed set.

NEW YORK TIMES & USA TODAY bestselling author Violet Duke is a former professor of English Education ecstatic to be on the other side of the page now writing emotion-rich stories with fun, everyday characters and sweet, sexy match-ups. Since her debut series in 2013, over a million readers have put all four of Violet's laugh & cry contemporary romance series on bestseller lists and Top 10 charts across the major eretailers, both in the U.S. and internationally.

When she isn't feeding her book-a-day addiction, Violet enjoys doing far too many things without checking the directions first (often with outrageous power tools she has no business operating), and cooking impossible-to-replicate 'special edition' dishes that laugh in the face of recipes. She lives in Hawai'i with her kids (Violet & Duke) and Mr. Violet Duke (their ringleader), with a PJs-and-rubber-slippers work dress code she takes very seriously. 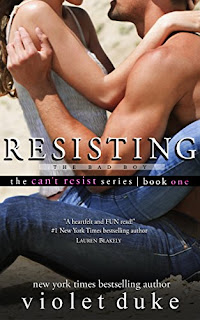 The moment that Connor Sullivan spots his brother Brian walking through the door with a heavenly beauty on his arm he is intrigued; not only because his brother hasn't dated in forever and bringing a date to one of his functions seems so out of character for him; but also because the woman on his arm has an undeniable magnetic pull that he just can't ignore, his eyes don't want to let her go. But upon further conversation and inspection he begins to suspect a farce brewing, there is a noticeable separation between them that airs on the side of platonic friendship, not the romance they are trying to pull off, and that gives him hope. He isn't in the habit of stealing his brothers women, but this one is definitely worth considering, she is smart, witty, and knows how to handle a man... and he wants her more than he has ever wanted anything else in his life! But going after her would be wrong on so many fronts...

Resisting the Bad Boy is a fast paced forbidden romance that is certain to lure you in from the first page, and hold on tight until the last, and that last page will get you good!! In this first book of the serial you will meet the Sullivan brothers and the woman who has found herself wedged nicely between them, being a friend to one and a lover to the other. After attending an evening out with Brian, her friend, she catches the eye of his handsome brother Connor, and before long they find themselves embroiled in a heated romance, but it comes with an expiration date. Connor doesn't do long term or deep attachments, and she knows that going in, but somewhere along the line he seems to forget that, and things start to get a little messy, which means lots of turmoil and angst to mess with your emotions. I thoroughly enjoyed this first installment, it was engaging, well written, and highly entertaining, can't wait for more!