The Teaser Reveal for SHATTERED LEGACY by Caitlyn Dare!!

The Blog Tour for Not My Match by Ilsa Madden-Mills!

“Madden-Mills masterfully handles the protagonists’ insecurities and traumas to produce a love story that’s equal parts tantalizing, gut-wrenching, and sweet.” --Publishers Weekly Not My Match, an all-new sports romance full of smoking hot chemistry from Wall Street Journal bestselling author Ilsa Madden-Mills, is available now ! Wall Street Journal bestselling author Ilsa Madden-Mills delivers a smart and sexy romance about a professional football hottie and the girl he’s sworn to never touch. Homeless and heartbreakingly innocent, Giselle Riley walks into my penthouse and chaos follows. I shouldn’t have invited the girl genius to live with me, but it’s clear she needs my help—not only for a place to lay her pretty blonde head but in finding real love, which she’s not going to get with the crazy men she picks up online. Too bad she’s a twenty-four-year-old virgin and I’m a bad boy wide receiver. She’s off limits for a hardcore player like me—and we’re just friends. Instead, I’m her m
Post a Comment
Reactions:
Learn more here...

The Blog Tour for This Hurt by Jenna Scott! 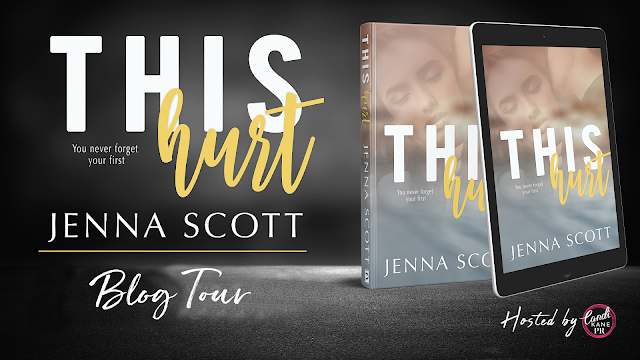 This Hurt  Series: This Boy Trilogy #2 By: Jenna Scott Release Date: January 19th   Add it to Goodreads!   Camilla didn’t know anything could feel like This Hurt… Camilla thought she’d left her past behind. Leaving public school for the elite halls she walks now should have been her fresh start. Her chance to be the girl she wants to be, not the girl other people think she is—most of all, to be the girl for Hunter Beck. But she can’t seem to outrun the rumors that chase her, and she’s starting to lose hope she ever will. The year is quickly drawing to a close. The future she’s been working towards seems farther away than ever before. Hunter and his father wield the power, she’s always known that. Her mother never misses an opportunity to remind her, either. Fighting for what she wants while staying true to her heart seems impossible. As her past and her future rush toward a collision, Camilla is no longer sure what her heart wants.  Should she leave everything behind and live the life
Post a Comment
Reactions:
Learn more here...

Before Him by K. A. Duggan is Now Live! 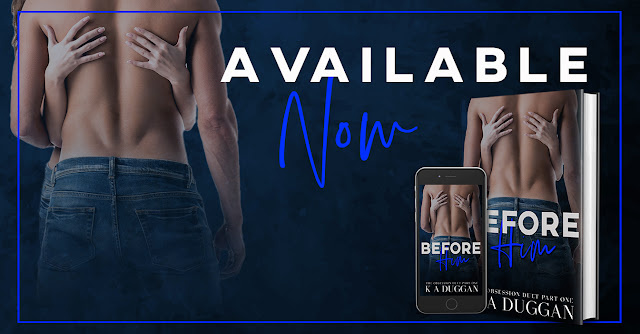 HOT NEW RELEASE Before Him  By: K A Duggan Obsession Duet book 1 She’ll do what’s needed to move on; Give him her trust Her heart Maybe even... her life. When painfully shy Enola Elias is set up on a blind date 5 years after ‘that night’, she decides to step out of her comfort zone and go, despite her crippling anxiety. Only she ends up further humiliated when she’s stood up, cementing her belief that men are nothing but a waste of time. When charismatic Carey Cooper steps in to save her from further embarrassment, they share a mutual attraction and instant chemistry. Enola wants her past to remain far away from her future. But as a private Investigator, Carey is used to unearthing buried secrets. Someone from the past is watching, waiting, biding their time for a chance to strike again. Buy Link - https://books2read.com/u/m0w98l Goodreads - https://www.goodreads.com/book/show/56616299-before-him   Book 2 Blogger sign up - http://bit.ly/AfterHerSignUp Pre- Order Book #2 here - https:/
Post a Comment
Reactions:
Learn more here...

Abbi Glines is excited to announce her next book release, Glitter, a Historical Fiction Romance coming this Spring! ♦ ♦ ♦   Glitter  Author: Abbi Glines  Genre: Regency Romance  Release Day: TBA  Cover Designer: https://damonza.com Lies, Deceit, Vengeance, Desire, and Hate…  wrapped up in a façade of all that sparkles and shines.  A pretty face, a fetching smile, a fabulous gown, a flutter of lashes at just the right moment – Miriam had been taught she must do all these things to land a wealthy husband. Much preferring the company of books to people, the only thing that stopped Miriam from fleeing to the countryside was her younger sister - who was counting on Miriam to make a match that would ensure she could care for her mother and sister properly.  He knew his duty to his title and he would do as was necessary.  Although Hugh Compton, Earl of Ashington, hadn’t wanted his father’s title at the age of nine and twenty, he gained it two years ago when his father
Post a Comment
Reactions:
Learn more here...
More posts