Check Out This Sexy New Read From Crimson Syn! 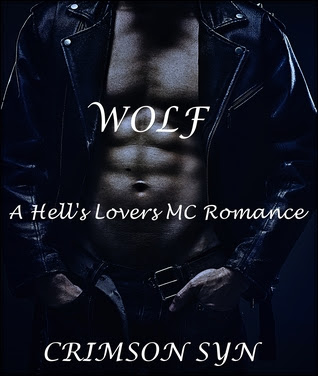 
Scarlett Chase is every man’s wet dream.
As soon as I laid eyes on her, I knew she’d be mine.
That is, until I found out she was untouchable.
One kiss, one forbidden touch, will have me out on the streets and stripped of who I am.
Yet I want her. I need her. And I’m done following all these damn rules.

Wolf Stone is my obsession.
Ever since he pulled over on that empty road, I’ve been tormented by the man.
His possessive words and heated looks have me tightly wound.
One touch, and he lights me on fire.
But I want more.
I not only want him in my bed, I want to keep him for myself.
But he won’t budge, and now it’s up to me to entice his sleeping wolf.

Explicit Sexual Content.
No shifters here ladies... just pure alpha biker hotness!
If you love rough, possessive and dirty talking alphas, then this is the book for you.

To be a part of her Synful Fanbase, giveaways, and get juicy bits of her next books in the Hell's Lovers series join her newsletter here:
http://eepurl.com/cFxRu9

Here Is My Review Of Wolf:

Being president of the Hell's Lovers MC definitely comes with it's advantages, Wolf Stone has never had to want for the attention of a woman, they are always waiting and willing to be the lucky one to warm his bed at night... and that was all fine and well until now. The moment he meets a stranded beauty alongside the road, he wants to explore every part of her, but she comes with complications that he can't ignore, she is the daughter of a well respected member, which means she is totally off limits! So he gets a little creative, and finds a way to pull her into his world, but having her around all the time could be harder than he anticipated, especially when he isn't allowed to touch!

When Scarlett Chase finds herself stranded alongside the ride, she never expected it to be the best thing to ever happen to her, when prince charming steps off his motorcycle and comes to her aid, she thinks she has died and gone to heaven. Every single inch of him is gorgeous, and she wants to run her hands over every part of him... until she finds out he is affiliated with her father's Motorcycle Club. Having any kind of a relationship with him could be detrimental to her health and the relationship she has with her father, so she will just have to admire him from afar... which could be a little easier said then done!! The man is a walking temptation no woman can ignore!

The moment I read the synopsis for this short and naughty little fairy tale I was intrigued, the mere mention of a man and his motorcycle and I was totally on board, and dying to learn more!! This was my first read from this author, and after a few paragraphs into it I was totally kicking myself for not making time to read one of her books before now! The story line pulled me in right away, and had me flying through the pages, dying to know more with each sentence I read. Wolf Stone was totally my kind of alpha... unapologetic, sexy as hell, and determined to get what he wants... and when he did I thought my Kindle was going to melt.. I mean WOW!! The sexual chemistry brewing between Scarlett and Wolf made for one hellaciously hot read, which is sure to put a grin on the faces of readers... and have them in dire need of  a fan!


Highly recommend you check out this wickedly satisfying read....you will not be disappointed!