Check Out This Sexy New Novella From Jillian Quinn!! 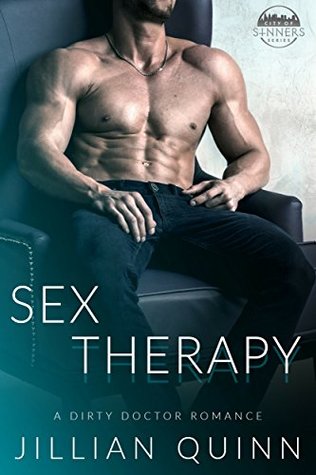 Lie down on my couch and spread your legs for me…

As the most respected s*x therapist in Philadelphia, Dr. Jackson King has earned himself a reputation. His patients call him The S*x Doctor, the perfect name for a man who not only fixes marriages but also hands out orgasms on his lunch breaks.

He’s hot and impatient, insatiable and dominant. Underneath his confident swagger is a man with a real problem, an addiction Jackson can’t kick. He likes the man he has become, embraces his urges.

After five years apart, the girl who turned Jackson into the womanizer he is today is back in his life and ready to make up for lost times. To get to the root of the problem, Chloe will have to submit to Jackson and fulfill his every desire. If she does, Jackson will teach Chloe the true meaning of S*x Therapy.

S*x Therapy is a 27k word standalone novella and the second book in the City of Sinners Series.

Jillian loves Mafia men, sports, bad boys, dirty talkers, strong female characters, and books with plenty of heat, all of which you will find in her books. As a lover of all things bookish, she has a serious book hoarding problem and runs a book blog in her free time. When she's not reading, writing, or blogging, she's obsessively fangirling over hockey players and can be found wherever she can catch the next hockey game.

Dr. Jackson King is good at what he does, when people are having issues in their marriage, they turn to the good doctor and he swoops in and gets things back on track for them. He gets to the root of their issues, tells them what they need to do to fix things, and just like that they are back to their version of normal. Now if he could only swoop in and fix that little part of himself that is in need of repair, problem is he can't shake the memories of a certain beautiful woman who turned his world upside down years ago. When she walked away it hurt, and since then he has tried to mask that hurt with countless women, and for the most part it has eased the pain... but when she breezes back through his office door, he can't help but be a little shaken. Now for the first time in a long time he is considering walking away from his womanizing ways... and closer to the one thing he never saw himself having!

The moment I started this hot little read I was hooked, the good doctor pulled me into his dirty little world, had me addicted, and from there I knew I couldn't walk away until I inhaled every last page... and damn was it tasty!! The chemistry between Jackson and Chloe was undeniable from the start and their intense attraction for one another kept things consistently hot throughout the entire story. This is by far one of hottest reads I have settled down with in a while, and all I can say is make sure you have a fan nearby because you're going to need it! Highly recommend you check out this wickedly satisfying addition to the City of Sinners series.... you will not be disappointed with what you find!