Only One I Want Hits Shelves Today!

Banned from Heaven. Escaped from Hell. They are UnHallowed.

Touched by the divine, Amaya Prince is a weapon, existing for one purpose—kill all creatures of Hell, including UnHallowed. But when the Archangel Michael approaches her with words she’s longed to hear since childhood, she can’t refuse his plea for help.

For UnHallowed Bane, nothing is more important than returning to Heaven and rejoining the Celestial Order. The former warrior angel has spent millennia on Earth atoning for his betrayal. When Michael offers him a shot at redemption, he accepts…even if it means deceiving his fellow UnHallowed.

Each with their own agenda, Bane and Amaya must put their differences aside and rely on one another in order to protect mankind from demons determined on opening the portal to Hell. But with secrets unfolding and passions flaring, humanity won’t be the only thing at stake. 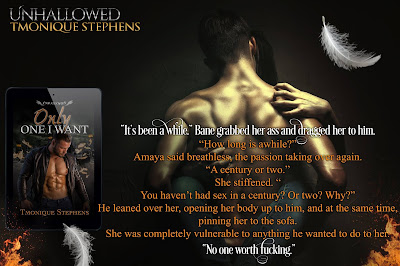 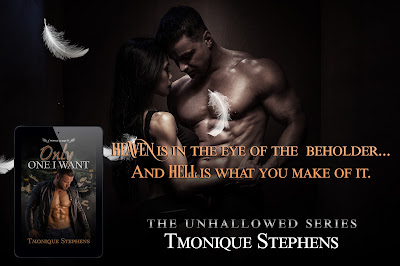 I wrote my first novel about a reporter and a hockey player after the U.S. hockey team won gold in the 1980 Olympics. I love writing flawed characters who reflect the emotional baggage we all carry. I write complicated stories for complicated people. Paranormal romances and fantasy novels are my favorite genre. I’ll read anything about fairies, demons, or angels, but I also enjoy Stephen King and Preston and Childs.

I’m hooked on Lucifer, The Backlist, The Strain, Vikings, Game of Thrones, The Walking Dead, and BlindSpot. I can’t get enough of these shows!

I was born in St. Thomas USVI, but grew up in The Bronx, New York one mile from Yankee Stadium. I love SyFy, the History channels, and Asian cuisine. But my heart and stomach longs for anything from the Caribbean. 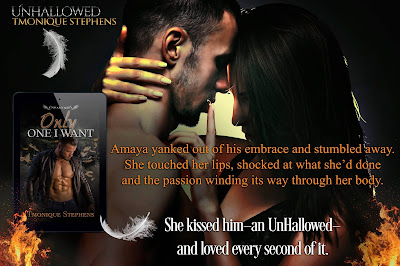