Something New From Abby Niles! 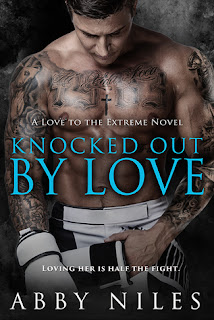 Scarlett Harris's life has just fallen down around her, and the only thing she wants to do is get away from it all, and clear her head, so she decides a girls weekend in the Bahamas is in order. For the last eight years her life has revolved around a man she thought she'd be married to forever, but after failed attempts to have the future they wanted, he wandered into the arms of another woman. Now everything she thought she knew about her life is a lie and it hurts so damn bad, but she knows she needs to find a way to move on without him, and rediscover the woman she once was and rewrite her future, a future without him. So, first thing on the agenda is finding the courage to flirt with another man... which doesn't quite go how she planned when it's intervened by her soon-to-be ex husband's best friend. He has no intention of letting her move on with someone on the island, so she convinces him to help her re-learn the art of flirting, but they soon learn there's far more then friendship between them...

From the moment Brody Minton met Scarlett he felt things for her that went far beyond friendship and no matter how much he wanted to be with her he knew there was no way he'd ever be able to act on them because she belonged to someone else... his best friend. So he tried his best to keep his feelings for her in check and treat her just as a friend, but it became increasingly hard the more time he spent around her, so he decided to put some space between them for the sanctity of his friendship with her husband. But when he runs into her at a resort in the Bahamas and she is flirting with a man that is not her husband, it instantly sets him off, and he intervenes thinking he is doing her a favor, and being true to his best friend, but he soon learns things are quite what they appear to be, and she is the one who has been duped, and now she wants his help... finding another man! So he agree's to help her, but he soon learns there's no way he can watch her move on with someone other than him!

This sexy little story drew me in and held my undivided attention from start to finish, I got so wrapped up in it that I ended up devouring it in one sitting, it was SO addictive!! This is my first experience with Ms. Niles work and I have to say she totally won me over with this one, between the captivating story line and her endearing characters, she has managed to turn me into a lifelong fan!! I have a serious thing for fighters and I have to say Brody has earned himself a spot amongst my list of favorites, the minute he appeared on the page he had me hook, line, and sinker!! He was everything you'd want in a book boyfriend and SO much more, he was domineering when he needed to be, soft and caring when the moment called for it, and completely dedicated to making sure the heroine happy, and it my book in doesn't get much better than that! Highly recommend you meet these two, their beautiful story is sure to leave you with a happy heart and a smile on your face!!

ARC requested through NetGalley, and kindly provided by Entangled Publishing in exchange for a honest and unbiased review.